By Stephen Henderson
Winning is something that the Patrick County High School Cougar basketball team and Coach Andrew Terry have been talking about for the past couple of weeks—and winning is what the Cougars did last Tuesday night and Wednesday night when the Gretna Hawks and Floyd County Buffaloes came to the Cougar gym. The Cougars beat the Hawks 57-47 and the Buffaloes 46-35.
There was some fire in the team both nights, and the first win was the best as far as Terry is concerned. “That first win can go a long ways,” he said.
The Cougars were down 15-11 after the first quarter of Tuesday’s game against Gretna and down 31-25 at the half.
The Cougars came out a more relaxed team after the intermission. Matt Amos and RJ Hagwood worked hard to cut the halftime lead early in the third quarter and edged ahead 38-36 at the beginning of the fourth.
Hagwood scored 11 for the Cougars while Matt Amos and Hunter Lawless each added 10 points. Frankie LaComa had nine. Amos added 11 rebounds, and Hagwood pulled down six.
When the Cougars played Floyd County Wednesday night, there was a feeling of confidence in the Cougar players.
Brandon Hubbard scored a three-pointer early in the game to move the Cougars ahead 7-5. They never gave up the lead from that point.
During the scrimmages a couple of weeks ago, the Cougars did not fare very well at the free-throw line. Wednesday night, they improved—hitting 8 of 11 to wrap up the win.
RJ Hagwood led scorers with 11 points. Brandon Hubbard added 10, including five of six from the foul line.
Friday, the Cougars hosted Halifax for the third home game of the week. The Cougars lost to the Comets 59-42.
Halifax led 20-9 in the first quarter and powered ahead 39-16 at the half. They maintained the pressure on the Cougars in the third quarter before relenting in the fourth when the Cougars picked up 22 points.
According to Terry, the Cougars got into a deep hole early on and found it difficult to pull out of. He was proud that the guys didn’t give up and had a good run in the final period of the game.
RJ Hagwood scored 16 points for the Cougars; Frankie LaComa added seven.
The Cougars traveled to Christiansburg Tuesday night. 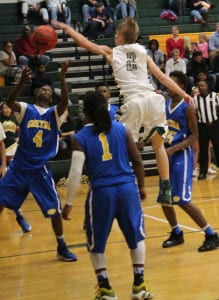 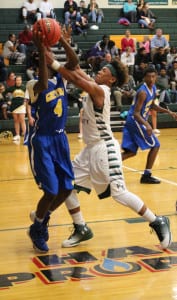 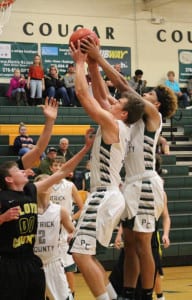