Karl Weiss will seek a fourth term as the Blue Ridge District Supervisor on the Patrick County Board of Supervisors.

A veteran of the U.S. Air Force, he has been involved in different capacities in the county for more than 30 years. He was active in several youth sports serving as a coach for many years and was an active member of the PCHS Athletic Booster Club. After his election to the Board of Supervisors, he also served on different committees in the county.
In his previous years as supervisor, Weiss supported remodeling efforts at all county schools and was involved in the rebuilding effort after a fire caused extensive damage to Meadows of Dan Elementary School.
During his tenure, Weiss has voted to support teachers and schools staff, supported the decision to build a new jail and also favored upgrades to the court house.
Weiss also supported officers and the local sheriff’s office, and lists the bid to create a paid rescue service as among his most cherished projects. He said the paid squad was important “so they could assist the local volunteer rescue squads and add additional emergency assistance to the citizens of the county.”
He “has and always will support” all volunteer fire and rescue squads as well as the paid squad, he said.
Weiss supports the local recreation department and all of the county’s parks, which he feels are important in each community. He, along with the Tourism Advisory Council, provided funding to all the parks in the county every year. Weiss also was instrumental and supportive of the Mayo River Rail Trail.
He has been involved in getting several gravel roads paved in the Blue Ridge District and has put several others on the six-year plan with VDOT.
Weiss, along with Rick Boucher’s support, fought to keep the U.S. Post Office in Vesta open.
In his previous terms, he has been involved with the local EDA and played a big part in helping to keep jobs at several companies in the county as well as supporting new businesses coming into the area.
He spearheaded an effort to get fire districts redrawn so residents who live within five miles of a fire department have the possibility paying lower rates for insurance policies. This project is nearing completion.
In asking for support in his reelection bid, Weiss said he will continue doing his “best to serve all the citizens of Patrick County.” 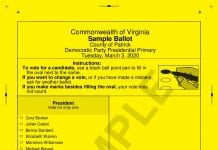