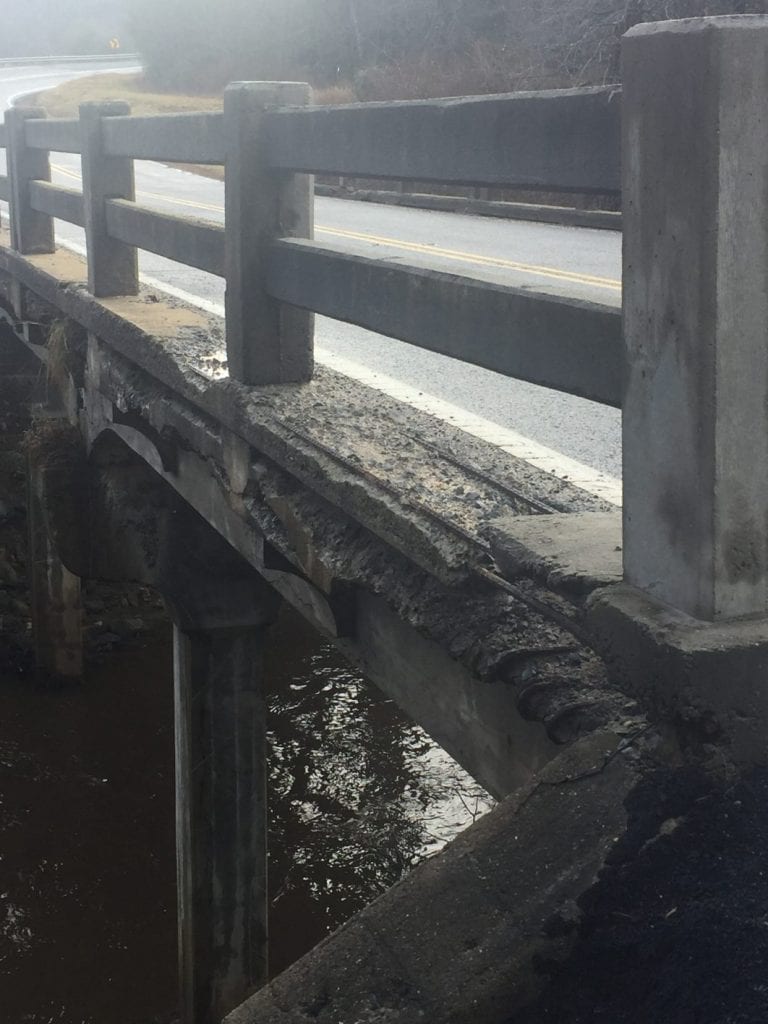 Inspection crews recently were at the site of a bridge that spans the Dan River on U.S. 58 in Meadows of Dan.

Situated just outside of Meadows of Dan, between Dan River Road and Blue Ridge Passage near the Cockram’s Mill Complex, the structure has prompted concerns among some local commuters due to its crumbling supports and cracking asphalt, and many ask “is it safe?”

Jen Ward, a spokesperson with the Virginia Department of Transportation, said that a survey crew recently performed a yearly inspection of the bridge. She added that all bridges in the Salem District undergo an annual inspection to check the status and condition.

Ward said that the survey crews evaluate the bridge and determine what potentially needs to be repaired to prolong the structure’s life and safety. She said safety is VDOT’s top priority.

Ward said the bridge was on the VDOTs project list, and they are in the works of starting that project.

The bridge initially was on a different project list, which included other improvements that would encompass the continuation of the four-lane highway between Meadows of Dan and Stuart.

She noted that project is at an indefinite standstill as it continues to wait for funds. However, due to data produced from inspections, Ward said the bridge has been removed from that project list and now is a standalone project.

Improvements to the bridge are estimated to cost $6.5 million, according to Ward. She said that the bridge project would be looking for bids from contractors in 2023, and that a start date and completion date were too far in the future to specify at this time.

The bridge was constructed in 1930, making the it around 90 years old, Ward said, and noted that the bridge is inspected annually to ensure its safety, as are all other bridges in the district.

Noting the inspection documents are “highly” technical and would involve the interpretation from an engineer, resulting in a “lengthy process,” Ward said if the survey crew produced data that showed the bridge to be unsafe, funds would be reorganized to help fund immediate repairs and extend the life of the bridge until a replacement project gets underway.

It also potentially could be reabsorbed into the U.S. 58 improvement Project, depending on which project breaks ground first.

To report potential hazardous or concerning conditions with roads and bridges, citizens may call VDOT at 1-800-FOR-ROAD (1-800-367-7623) to place a work order or inquire about repairs.

Patrick among localities to receive broadband grant funds, work on upgrades expected to get underway this spring